Posted on December 10, 2015 by philippaodonnell

We left Dominica feeling privileged to have anchored in such a wild and beautiful place.  We left bound for Martinque.  It was one of the few passages that actually went to plan, that is, pitstop for one night and move swiftly on in the morning.  That we did. Good job too as it did not look that pretty.  Although our passage there was as unremarkable as the destination, I will always remember it as we arrived there on our 353rd day at sea on which we entered 5004 miles into our log. Woohoo!

The next passage finally took us to St Lucia.  All went well.  We ended up in Marigot Bay.  The plan was for one night only as the onward forecast was good.  Marigot looked gorgeous in the guide. It is the white sandy beached idyll of any holiday brochure.  It is the repository of your hard earned cash.  You can plunge it here whilst slapping on the suncream and admiring a fit rasta as he offers you an over priced drink or joint.  However I’m afraid, I detested it.  It was my idea of hell. The atmosphere physical and otherwise was the end result of 25 years of mass tourism.  Fat pasty cellulite riddened tourists drinking juiced downed cocktails being chatted up by local muscle.  Where I hoped to find a supermarket or vegetable stall, there were only restaurants and bars. There were no tomatoes.  No vegetables. Even the WIFI was rubbish. That first night the big charter catamaran next to us was boarded by a thief and cash was stolen.  I detested it more.

Of course we did not know any of this until after we had dropped the hook. The chain ran off the deck like a stone down a well.  It rocketed down a depth of 40 foot in an instant. Never had we anchored anywhere so deep. Usually, we found ourselves in 20 foot or less. Whilst we were happy that the hook held, Ben was not so happy about having so much chain out. We were in 40 feet with no windlass to help get the chain up. Our muscles winced at the prospect. Then we discovered that the good forecast had changed to a windy forecast.  Small craft advisories suggested no boat go anywhere for several days.  Terrific I thought.  More wind AND trapped in a Disneyland nightmare with not even a fresh vegetable with which I could be happy about.

We woke the following morning to the thorny issue of the anchor.  There would be no getting away in a hurry if need be. The only solution was to re-anchor in shallower water. It was the sensible thing to do and I do have a very sensible captain.  He told me that it would require both of us to pull up the chain.  And so we did.  It was like something out of Hornblower. I am not kididng. Ben said ‘HEAVE’ and together we heaved as the girls screamed from their gated prison below whilst other ‘automated’ yachts wondered what was wrong with our windlass.  Ahemmm.  As it was we got the anchor up and congratulated ourselves whilst the lactic acid tore our muscles apart.  That it took a further hour to re-anchor due to a steep shelf beneath is another story.

In the end we escaped Marigot and ended up 10 miles south, in Soufriere tucked up under the Pitons.  We got ‘stuck’ for 10 days more during which we celebreated a year at sea and rain like never before!  (See Dec 3 post).  Soufriere was entirely different.  There we rubbed shoulders with real (local) people living their everyday lives.  We were free of the madness of Marigot, though not the impact of mass tourism as we were assumed to be wealthy.  There was definitely an edge there.  Initially we were concerned about security.  Even some of the locals referred to robbers and thefts from boats on the other side of the bay but that if we stayed on their side, on their mooring ball, we would be ok.  It was hard to know what to believe and who to believe.  We felt white and rich. (Of course we are! Though the latter fact I struggled to come to terms with as I nestled into my bucket). We were plagued by local kids who paddled out to the boat and hung on to ours asking for biscuits and coca-cola.  Dread locked men with intimidating physiques drove at high speed in their brightly painted wooden boats marking their patch. Yes,  white and puny and a little bit vulnerable were we. The town looked like a western film set. The rum bars had flagstone flooring and 200 year old timbers. Crack addicts asked for money.  Before we could diplomatically say ‘no go away’, local voices quickly and very vocally, swatted them away.  It was an edgy place but inspite of it all, we loved it. I wish I had taken more photos but it just felt wrong.

Our departure from Soufriere, St Lucia was also a night to remember.  We were due to leave on a Saturday.  By Friday afternoon our two day window vanished. Another depression appeared which spelt another week in Soufriere.  As much as we liked it it was time to get going.  Hurricane season was only maturing and we had to get south.  Either we went in the next 12 hours to dodge another tropical wave or we waited another week.  I suggested (not too calmly I might add) that we go right now.  I knew it was reckless and I knew Ben was right to say, no but I was desperate to leave. Unfortunately this ensured my bad mood and Ben’s frustration.  I grumbled my way through the day and tried to find some zen calm but none was to be found.  I went to bed to be woken by Ben in the middle of the night.  He said ruefully that he had been watching the clouds and the sky and that he thought the conditions smelt right.  As he leant into the foc’s’le his bristles tickling my ears, he whispered ‘we can go but we have to go right now.’.  It was 2am, the girls were asleep, the moon was full.  It was perfect.  We untied ourselves from the mooring ball and slipped away like secret mariners curled up like cats in the cockpit staring at the sky.  The moon was full and bright which made the Pitons better than 3D. We sailed away bound for Bequia and bypassing St Vincent.  It was a stunning sail and one that made everything ALRIGHT.  The first decent and forgiving sail we had had since arriving in Antigua all those months ago.

And so we arrived in Bequia where we spent a few days.  Then we pushed South to Carriacou a  deserted quite idyll which we fell in love with. (Grenada and Carriacou are one nation across two islands.  Carriacou lies to the north of Grenada.)  In C arriacou, we dreamed big dreams, Ben could build a boat on the beach whilst I could work in a sail loft on the beach (both possibilities very real and very doable!).  The only problem was the kids and their need for more. 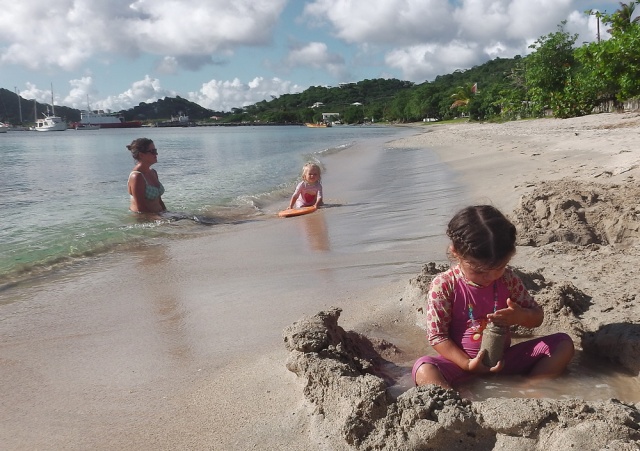 We could have spent the rest of our lives on Carriacou, but the need to work, earn money and find some kids for the girls took priority (boohoo!).  We also were fatigued after so much time in transit and just had to push on the last 30 odd miles to Grenada.  That we did.

This entry was posted in Uncategorized. Bookmark the permalink.